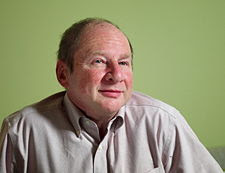 Hal was co-lecturer of 6.001 when I took it in 1983. I've already blogged about how he made me reconsider my opinion of Lisp by pre-empting my objections about efficiency and getting the machine to do calculus on day one.

I was also amazed by Hal's book Turtle Geometry. Hal was involved in the development of Logo for the Apple II computer. I had heard of Logo as a `kid's language', but I discovered that it was a bit more interesting than that when I flipped through Hal's book. The first chapter involved the pretty pictures you could generate through simple iterative and recursive programs, but the later chapters involve vector analysis, topology, linearity, symmetry groups, invariance, and differential geometry. The final chapter introduces General Relativity.

Hal has a way of taking very complex ideas, extracting the core concepts, and reframing them in an intuitive and easy to understand manner. I'm excited that Hal is doing a sabbatical at Google and I hope I can help him out.
Posted by Joe Marshall at 10:32 AM